Some of the articles in this issue of Missio Dei were designed to deal with the vexed issue of partnership in Christian missions. Other submissions were not, yet they seem to be on topic. This is possibly nothing more than happy coincidence, but the fact is that the issue of partnership encompasses many matters. There are few discussions in contemporary missiology that have nothing to do with the practice of partnership. Is this because partnership is a catch-all category, ultimately too nebulous to delimit a precise set of concerns? Or is it the case that partnership is broad enough to provide a framework for integrating disparate questions? It is up to the reader to decide.

The present articles deal with issues including:

There is a diverse set of interests and concerns among the authors represented here. Some key themes interweave their work, however. Like a tapestry, these themes together give shape to the question of partnership. The picture that emerges here is one of complex relationships fraught by cultural differences, a heritage of Western paternalism, economic disparity, unrelenting hope and goodwill, repentance and forgiveness, and the need for fearless innovation.

It is not clear, though, which relationships are in view: those of congregations, organizations, individuals, or all of the above in every combination? Indeed, the discussion of partnership at large lacks precision in this regard. At times it seems this is due to a certain insensitivity to the substantial differences between the diverse kinds of relationships involved in global missions. The way that a long-term cross-cultural missionary relates to local partners is radically different than the way short-term mission teams do (here is another of those missiological discussions that partnership encompasses!). Yet, a long-term cross-cultural missionary’s relationship with local partners differs so much more from that of, say, a US church “partnering” financially with a Majority World minister that it should be measured by a different order of magnitude altogether. Add inter-congregational partnerships and the role of parachurch organizations to the mix, and the effect is dizzying.

At other times it seems there is a lack of appreciation for the fundamental sameness of partnerships at home and abroad, as though partnership were a term reserved for international, intercultural entanglements. This is, of course, clearly not the case in highly globalized urban centers (globalization being another of those issues connected with partnership) where partnerships in the neighborhood can be every bit as complicated as those on the international stage. Even so, to limit partnership to such culturally conflicted relationships misses the point of the analogy with other types of collaboration in mission: a theological point about the way we relate to each other in Christ. The implications of local, intracultural partnerships for international, intercultural partnerships, and vice versa, may be more significant than the present limits of the discourse would suggest. At the very least, the analogy of these partnerships calls for more clarity about what type of partnership is in view in any given discussion. To that end, I offer a matrix for locating partnerships in relation to other types.

A Typology of Partnership

Two basic types of relationship are in view when we talk about missions partnerships: local and nonlocal. These are defined in terms of proximity: a scale of distance. Partnerships may be specified as regional, national, international, and so forth, but the point is not to assign an adjective. What matters is the effect distance has on the relationship.1 The bottom line is that distance makes meaningful relationship difficult.

Two more basic variables further delimit partnerships. One is cultural dissimilarity: a scale of difference.2 It goes virtually without saying that cultural differences make collaboration difficult. Nonetheless, it is fair to claim that partners in Christian mission often act as though such differences are superficial or that love and the guidance of the Holy Spirit will inevitably overcome these barriers. We need to recalibrate our expectations, and one way to do so is to clarify the significant differences between types of partnerships in a visual way: 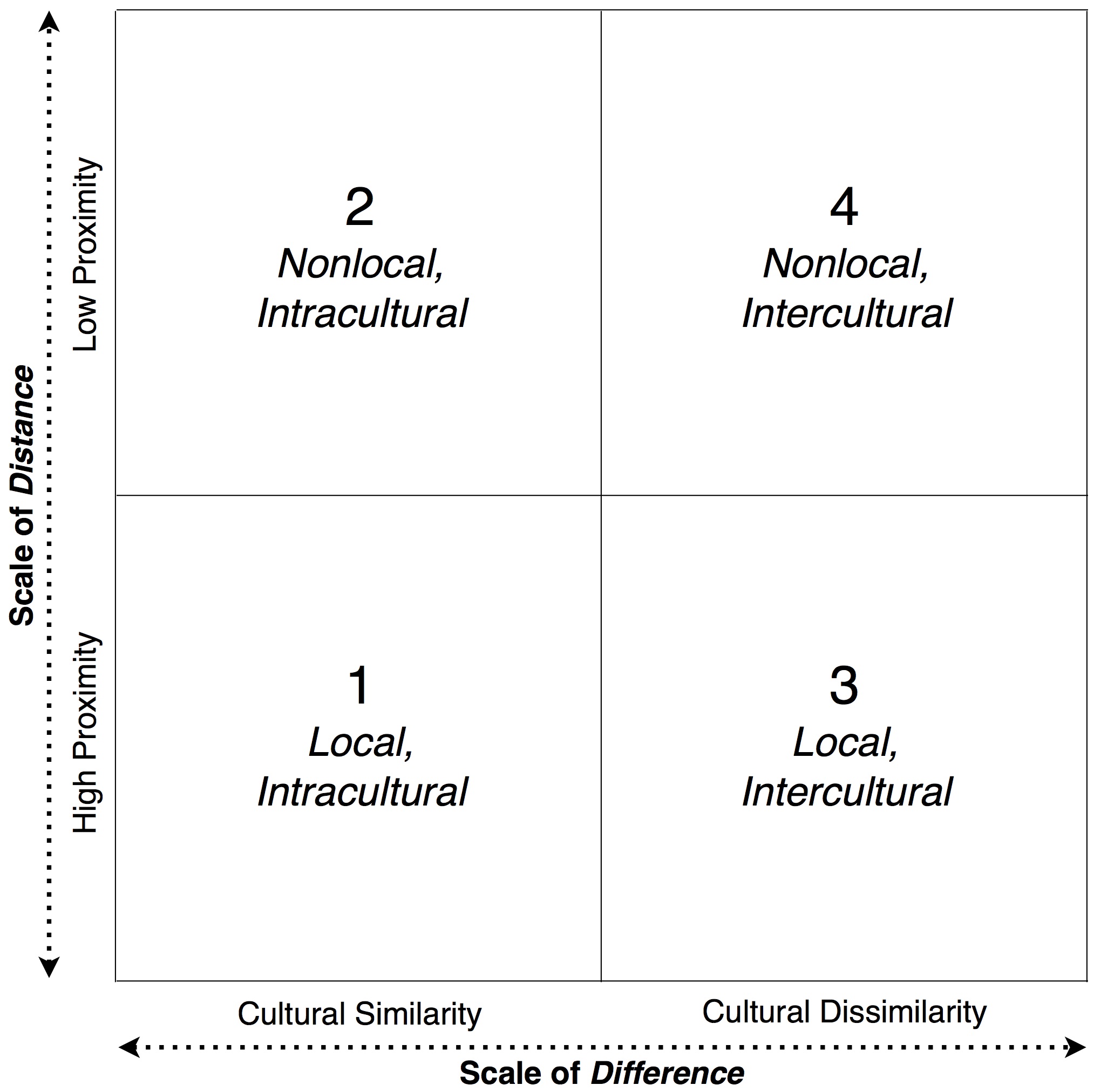 The scales of distance and difference are not technical measurements. There is nothing to gain by drawing a line at a certain number of kilometers and declaring we have reached low proximity. That would be arbitrary and inconsequential. Likewise, while we might utilize the methods of measuring cultural difference that do indeed exist—and the value of these is not to be underestimated—the diagram does not attempt to represent a definitive definition of similarity or dissimilarity. The diversity of analytical tools and the irreducible complexity of our cultural differences would make that, too, a futile exercise. What is not futile, however, is the evaluation of a partnership in order to appreciate what type of collaboration it is. To recognize that a potential partner is both very distant and very different allows one to form appropriate expectations. This will be a profoundly complicated relationship that will likely entail substantial misunderstanding and practical difficulty. If our approach to such a partnership looks essentially the same as our approach to other types of collaboration, we have likely underestimated the implications of distance and difference.

Most of the partnerships at stake in the current discussion are marked by considerable distance and difference, and even those that fall somewhere else on the matrix are complicated enough to merit the careful consideration of their unique challenges in contrast with other types of partnership. But locating a partnership in this way does not represent the complete picture. A third variable adds another layer of complexity.

The final variable is mediation: a scale of advocacy. Mediation refers to the involvement of an agent who works on behalf of the partnership. As an advocate of the partnership, the ideal mediator is one with the skills to help both parties deal with the complexity of their relationship by facilitating communication and mutual understanding. In nonlocal, intercultural partnerships, this is someone with the ability to be present with each party in lieu of partners’ proximity to each other and to communicate cross-culturally on behalf of each party. Skillful mediation can, therefore, reduce the difficulty of the relationship. This is also the case in other types of partnerships. Even local, intracultural partnerships often lack the skills necessary to communicate well, manage conflict, or carry out the work in which they seek to collaborate. Mediation, then, can add a vital third dimension to an otherwise two-dimensional partnership. Adding this dimension to Diagram 1 looks something like this: 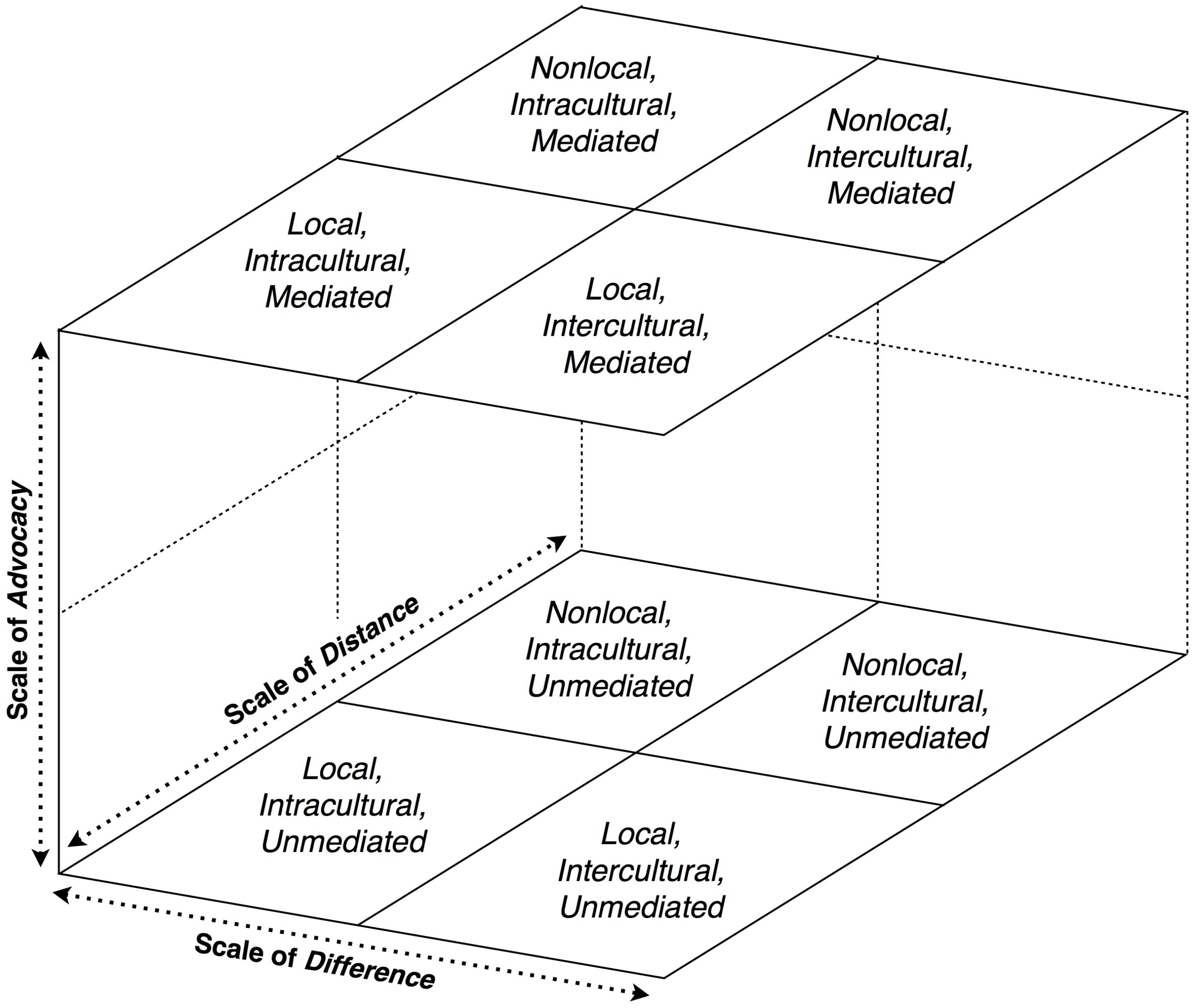 Mediated partnerships, though they still entail distance and difference, constitute an essentially distinctive type of partnership. They not only entail better-cultivated relationships in most cases but also involve additional relationships with unique dynamics. This model suggests the following eight basic types of missions partnerships.

Any given essay on partnership is unlikely to speak to every type of partnership, even though the tendency of the broader discussion is to generalize about partnership as a whole. Thus, while the typology indicates the diversity of relationships that can exist in missions partnerships, its immediate purpose is to help the reader situate the discussions engaged in this issue of Missio Dei. Of course, plenty of work remains: comparing and contrasting various types of partnership, nuancing best practices for specific applications, and ultimately forming more conscientious partnerships. Our present task, however, is to explore the insights these authors have already offered, remembering that what we talk about when we talk about partnership is complex and worthy of careful consideration.

1 The technical term for this variable in business administration research literature is geographical proximity. See Joris Knoben and Leon Oerlemans, “Proximity and Inter-Organizational Collaboration: A Literature Review,” International Journal of Management Reviews 8, no. 2 (2006): 71–89, https://pure.uvt.nl/portal/files/750279/Proximity.pdf, for a very helpful disambiguation of proximity terminology. The absence of face-to-face communication has long been a concern of inter-organizational collaboration, but the evolution of Internet technologies has recently set the agenda for research on proximity. Rapidly digitizing industries, particularly business and education, continually seek new insights into the effects of proximity on communication, productivity, and innovation. The question, however, is about the possibility of relatively strong collaboration, because there is no doubt that face-to-face (i.e., high-proximity) collaboration is the most communicative, productive, and innovative. See Bonnie A. Nardi and Steve Whittaker, “The Place of Face-to-Face Communication in Distributed Work,” in Distributed Work, ed. Pamela J. Hinds and Sara Kiesler (Cambridge, MA: Massachusetts Institute of Technology, 2002), 83–112.

2 Cultural difference is another type of proximity in business research. Knoben and Oerlemans bring together cognitive, institutional, cultural, and social proximity under the essential category of organizational proximity. This displays the complexity of difference at stake, and it makes sense for business administrators to think primarily in organizational terms. For missiological purposes, however, culture is the broad theoretical category that naturally encompasses the psychological, social, institutional, and organizational differences under consideration. Furthermore, employing distinct terminology (proximity/distance and dissimilarity/difference) provides more conceptual clarity than referring to each variable as a kind of proximity.