Review of Jared Looney, Crossroads of the Nations: Diaspora, Globalization, and Evangelism 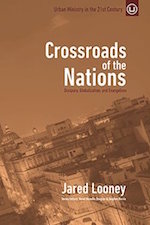 Jared Looney is the executive director of Global City Mission Initiative (http://globalcitymission.org), a nonprofit organization that equips churches and evangelists for ministry among immigrant communities in major urban centers. He writes Crossroads of the Nations, the first book in the Urban Ministry in the 21st Century series (Urban Loft Publishers), encouraging dominant culture churches of North America to take advantage of the opportunities for mission now at our doorstep thanks to the twin forces of urbanization and international migration. For clergy and lay persons desiring a well-informed introduction to the changing face of urban ministry that does not bog down in scholarly minutiae, Crossroads of the Nations is a great place to start.

After an adulatory foreword by diaspora missiologist Enoch Wan, Looney’s first chapter opens with a number of poignant anecdotes on the ways that globalization and migration are transforming North American cities. His use of stories and real-life examples strengthens the book, lending to its accessibility and readability. Chapter one summarizes the book’s major themes and arguments—the central argument being that urban centers ought to be the focus of missiological thinking and strategy. Chapter two furthers this argument by exploring the strategic importance of cities in a world of transnational social networks, which, among other things, give Western churches unprecedented access to many unreached people groups.

Chapter three, the most impassioned chapter of the book, addresses anti-immigrant sentiments within the dominant culture, arguing that hospitality toward the migrant is the biblical standard. Chapter four then revisits the missional opportunities afforded by diaspora networks in order to challenge churches to reimagine church multiplication strategies, cross-denominational partnerships, and adaptive community structures that better reflect society’s growing mobility. With the decline of the church in the West and the rise of Christianity in the global South and East, Looney repeatedly points to the influx of Christian immigrants, the growth of ethnic churches, and their potential missionary force as signs for hope.

Chapters five and six turn to the topic of how to equip churches for evangelism among diaspora communities. Here, the author maintains that our evangelism and church planting must be relational, reproducible, and easily contextualized. Looney concludes chapter six with a particularly insightful discussion of ways that churches can take advantage of diaspora networks to make short-term mission trips more strategic and relational. The final chapter challenges congregations to reclaim their missionary identity, to train their congregants for cross-cultural ministry, and to intentionally build relationships outside their usual sociocultural circles. He closes by highlighting the importance of hospitality and of creating safe and welcoming spaces outside of church buildings for engaging unreached migrants.

Reflection questions at the end of each chapter facilitate the use of this text in small group settings (which likely explains some of the book’s repetitiveness). Lay readers will benefit from the many practical examples of how churches can get involved in mission among migrants. This book is a timely read in this controversy-ridden election year, as it represents a challenge to the large population of majority-group Christians in our country who have too often been fertile soil for anti-immigrant sentiment. Looney calls Christians to think missionally about the immigrant among us, and I long for that day when our conversations on immigration sound less like Trump and more like Looney. I long for the day when we stop seeing immigrants as threats to national security and instead welcome them as partners in global mission. I long for the day when we no longer see them as drains on our economy but as “bringers of blessings” (71) for the work of global mission.

Looney locates his book within the field of “diaspora missiology” and draws heavily on the research of major proponents Enoch Wan, Sadiri Joy Tira, and J. D. Payne. Unfortunately, much of their research unintentionally characterizes immigrants (two-thirds of whom are Christians!1) as objects of missionary outreach in need of help, training, and mobilization from Western sources and thus falls short of fully grasping the significance of non-Western initiatives and movements for the future of the global church. Thankfully, Crossroads of the Nations is more balanced in portraying Christian migrants not only as objects of mission but also as agents of mission whose dynamic faith and evangelistic zeal are contributing significantly to the revitalization of the church in the West. The inclusion of more research on ways that migrants and their congregations are already shaping the American religious landscape would have strengthened this excellent text. At its core, Crossroads of the Nations is the fervent appeal of a well-informed practitioner for Western churches to embrace our missionary identity, and my hope is that Looney’s book will spark many long-overdue conversations among majority-culture churches throughout North America.